You are here: Home1 / News2 / Dogs3 / Owners of abandoned dog blame rescuers for their dog’s predicame... 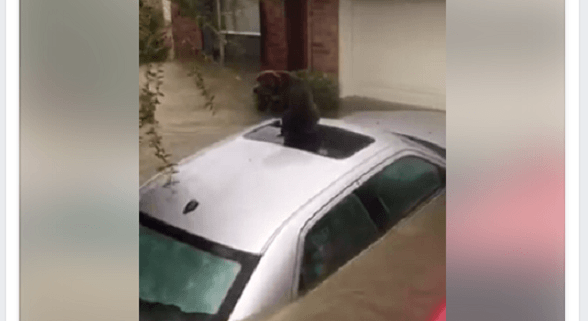 The owners of a dog who was abandoned in the midst of the massive Houston-area flooding are speaking out against the people who are criticizing them, and pointing the finger of blame at rescuers. According to CBS DFW News, earlier this week, all eyes were on the plight of “Blue,” a pit bull spotted on top of a car which was submerged in water.

Rescuers had attempted to help the dog, but he was so terrified that he reacted to the offer of help and rescuers decided that the risk was too great to proceed. The video, which was shared extensively on social media, sparked a good deal of outrage and Blue’s owner, Charles Rogers, believes that the anger is unfair. In fact, he blames rescuers for the dog being left behind. Rogers told CBS, “My wife and I were thinking the rescuers were just going to go back and get him.”

UPDATE: CBS11's JD Miles can now report the dog was rescued and is OK. He shot this heart-breaking video of an abandoned pet in Houston. The frightened dog was too aggressive for rescue boats, which couldn't safely get close enough to save him. They had no choice but to leave him as flood waters quickly rose around him.

Because the Rogers were evacuated quickly from their home, they have stated that they were in “survival mode,” and anguished about their decision to only take their small dog with them. Blue was left in a fenced back yard but managed to jump the fence and find safety on top of a car.

Ultimately, Blue was rescued by Kyle Scott and Roy Ethridge, good Samaritans who managed to win the trust of the terrified dog. According to CBS, Rogers wants his dog back and rescuers have agreed to hand him over.