You are here: Home1 / News2 / animal cruelty3 / Man’s method of punishing his dogs creates an uproar 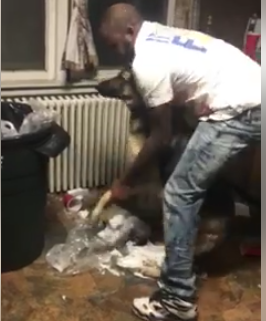 On May 14, a Facebook user named Aaron Riley uploaded a video of him punishing his dogs for getting into the trash. The video caption reads:

Told y’all I was gonna do it

The video shows the man, reportedly from Buffalo, New York, forcing his German shepherds to “pick up” the trash and put it back in the garbage container. As the dogs are “cleaning up” the man, who appears to be quite angry, is dropping multiple expletives. 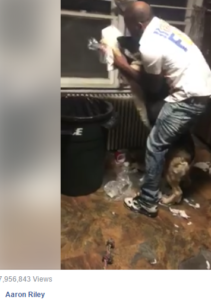 According to Tuesday’s WGRZ News, in the midst of the video being viewed thousands of times on social media, multiple reports were made to the SPCA Serving Erie County about the concerning situation. The animal welfare organization addressed the issue on Tuesday:

Working in coordination with the District Attorney’s office, the SPCA was recently made aware of a Facebook post that involved a Buffalo resident and his two German shepherd dogs. We are glad to report that SPCA Officers made contact with the resident and the dogs and concluded that the dogs are in excellent condition and in good health. At this time, there is no violation of New York State law.
We thank everyone who has expressed concern regarding the video.

Individuals who were upset about the video are again outraged that nothing is being done, and many have voiced their concern about the overall manner that the dogs in this man’s care are treated.

As for the “issue” which upset the man in the video (garbage all over the floor), the logical solution is to keep the trash away from where the dogs can access it, and/or secured so they can’t get into it. 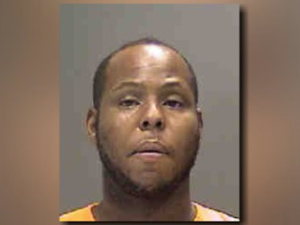