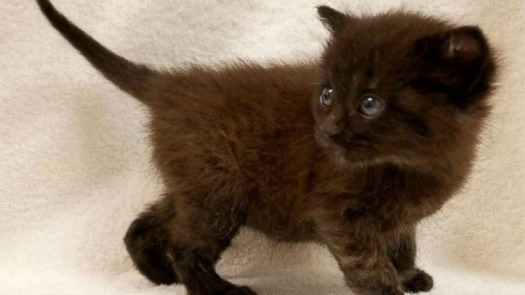 Meet Burrito – indeed a very cute kitten as are most of the cuddly little felines, but this tortoiseshell is different. Burrito is a boy! The six-week-old kitten is considered rare due to the gene that controls his orange and black fur color. 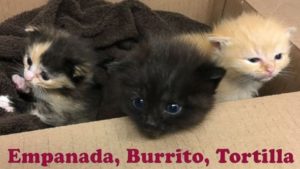 In a press release from the Animal Welfare Association, Dr. Erin Henry was more than slightly surprised as she turned the little cutie over to reveal the kitten’s sex; probably being the only male tortoiseshell the veterinarian has ever seen. Dr. Henry explained:

“Females have two X chromosomes, while males have an XY combination,” the Animal Welfare Association said in a press release. “This means that only female cats can have orange and black fur. To be a male tortoiseshell cat, he must have three sex chromosomes: two XXs and one Y.”

Burrito arrived with his two litter mates, Empanada and Tortilla at the Vorhees, New Jersey rescue the second week in April. So far there have been nearly 400 adoption offers from around the country including Canada. According to the organization’s Facebook page, Burrito will be ready for adoption when he is eight-weeks old and this weekend, the cuddly, curious and adorable little boy kitten will be a guest at the AWA’s Paws and Feet 5K Race and Doggie Fun Day. And a special message from Burrito for everyone and for those kind people wanting to adopt him:

“He is asking that everyone donate $15 towards kitten care today for all the kittens like him that are coming in and need round the clock care because they are too young to fend for themselves. We have over 100 kittens in foster care right now. Please donate now and help homeless pets like Burrito. https://app.mobilecause.com/vf/PF5K“ 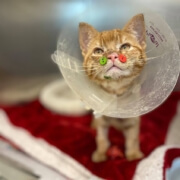