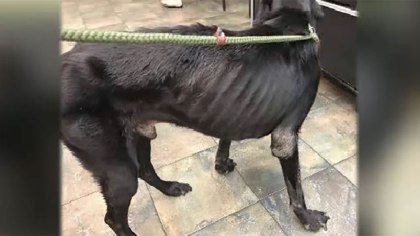 An emaciated dog was seized by the authorities in Liberty Borough, Pennsylvania, after being found by good Samaritans on Saturday night. According to CBS Pittsburgh, the skeletal Labrador retriever, who is reported to be 17 years of age, wandered into the yard of a family who was enjoying a fire on Saturday evening.

This thing was emaciated like I’ve never seen it before, we felt so bad for him. My son was hand-feeding the guy in rage. The claws on his paws were never cut. It just looked a wild animal, but emaciated like you would not believe.”

Animal control seized Bo and he is receiving veterinary care, but it is unknown if he will survive.  Lt. Raymond Johnson with Liberty Borough Police described Bo’s dismal condition, “The dog is full of fleas, and has Lyme Disease. On a scale of 1 to 10, the dog is at a 1 with being starved to death.”

Read about some helpful hints to keep your dogs safe during fireworks! Click here.

Giraffe at zoo dies after tragic incident with his father