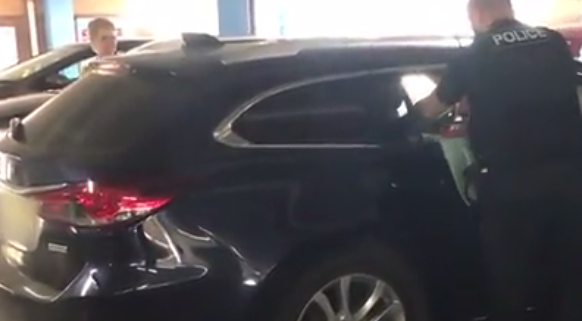 A dog, whose owner referred to as “frail and fragile,” was rescued from the scorching hot interior of a car which was parked in a shopping center in Newmarket, Suffolk. According to Saturday’s publication of The Sun, a responding police officer used a tool to break out one of the car windows in order to save the suffering dog inside.

Shortly after the officer broke out the car window, the dog’s owner returned – the man admitted that he had been away “longer than he thought.”

The dog who had been left inside of the virtual oven on wheels could barely walk when removed – the dog’s owner blamed the dog’s problems on Alzheimers, not the heat inside of the parked car, which had no cracked windows, or water inside.

Thanks to an alert passerby, the dog was saved – if not for the police officer’s intervention, the outcome would have been much, much worse.

Please be vigilant in parking areas – if you see a dog inside of a parked car, reach out for help from the authorities. If you are a dog owner – leave your pet at home during hot weather.

Department apologizes for officer’s crass handling of dog who was hit...