You are here: Home1 / News2 / animal cruelty3 / Department apologizes for officer’s crass handling of dog who was...

The Painesville Police Department has apologized for the crass manner that one of its officers displayed while handling a dog who had been hit by a car. The department issued an official statement after someone made a Facebook post alleging that an officer had kicked a dog as she lay dying on the ground.

According to the official statement, the person who called in to report the incident advised the department that the dog had already died. A portion of the department’s release reads:

She told me that in her view the Officer was just being lazy, and was kicking at the sheet to cover the dog completely before picking it up, however the officer admitted to nudging the dog with his foot in order to make certain he would not be bitten before picking up the dog. The officer, (unaware children were watching), grabbed the dog by its front legs, and loaded it into the trunk of another officers cruiser who had arrived on scene to assist.

We are fully aware that those observing this incident were upset by the abrupt manner in which the officer loaded the dog into the trunk of a cruiser. This could have been alleviated by waiting for another officer to assist, so that the process of picking the dog up would have been more discreet. Doing so would have of course been preferable, and would have allowed us to avoid the appearance that he did not care about the animal.

The Department has apologized to the dog’s owner, and indicated that future situations will be handled better:

We will be making certain that incidents like this will not be handled in this manner in the future, and this incident is under review by myself and our internal investigations supervisors to determine what discipline and or corrective measures will be taken regarding this incident. 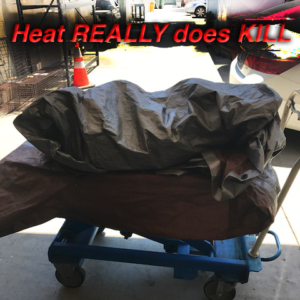