A disgruntled client, who publicly accused a grooming business of severely injuring a small, mixed-breed dog, caused an uproar on social media following a damning Facebook post about the alleged incident. According to Monday’s Syracuse.com, the allegations made against the business, Carm’s Dog House, were later determined to be completely false. 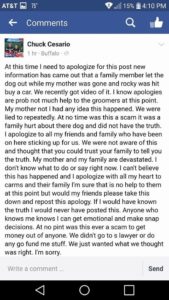 The trouble began when Chuck Cesario, the son of the owner of the injured dog, left a scathing review accusing a groomer at Carm’s Dog House of breaking the dog’s leg. The dog, named “Rocky,” was so horribly injured that a veterinarian determined that he needed to see a specialist for surgery.

Suffice to say, the allegation which was posted on Facebook resulted in a huge uproar from customers, who quickly began canceling appointments and harassing the business.

But it turns out that although the dog was truly injured, his injuries had nothing to do with his grooming appointment with Carm’s Dog House. In fact, surveillance footage taken near the dog owner’s apartment complex revealed that Rocky was hit by a car while he was being walked, off leash, by one of his owner’s relatives. The incident happened a few hours after the dog’s grooming appointment on May 20.

Cesario, the man who stirred up the hornet’s nest of outrage on social media, later issued an apology to the business, acknowledging that Rocky was not injured because of anything that they had done.

Though the damage to the business’ reputation was significant, there has been an outpouring of support for Carm’s Dog House by happy, satisfied customers who want the truth about what happened to be shared as virally as the false allegation was.

(Image via Facebook/screenshot via Syracuse.com)