You are here: Home1 / News2 / Dogs3 / Dog missing for weeks found at the bottom of abandoned well

A dog who was missing for several weeks was found earlier this week at the bottom of an abandoned well in Hall County, Georgia. The dog, named “Sugar Bear,” was found on Tuesday – standing in stagnant water at the bottom of the 35-foot well, reported WTSP News. 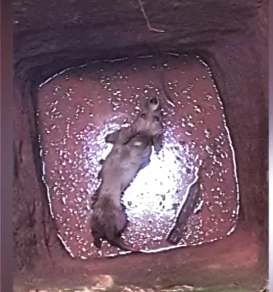 Sugar Bear is believed to have been trapped in the deep well for weeks – rescuers surmise that the water kept her alive. The dog’s owner, Carolyn Smith expressed joy as her missing dog was pulled up from the well by Hall County Fire fighters,  she said, “Thank God…Thank you, thank you, thank you.”

Sugar Bear and the family’s other dog, Zoe, disappeared in December after a plumber accidentally let them outside – neighbors and family had been searching the area ever since. Tips eventually led the search to a certain area and Sugar Bear’s barking ultimately resulted in her being found. Zoe, who was not in the well, also turned up shortly after Sugar Bear was discovered – likely lingering in the area waiting for her canine friend to be saved.

Though Sugar Bear lost quite a bit of weight, she is expected to recover from the frightening ordeal.