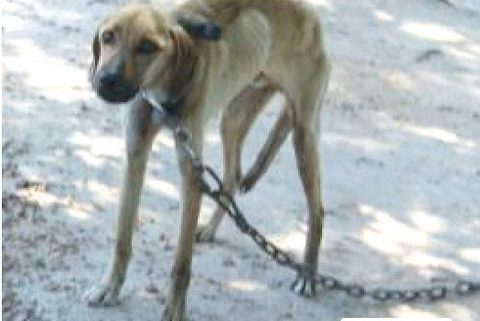 We have all heard the age-old adage that a dog is man’s best friend. But is man dog’s best friend? Each summer we hear countless stories of dogs dying from heatstroke or dehydration. In winter we hear of them freezing to death. Why? Because they are left chained in a yard, forgotten, and unattended.

How many adorable Christmas puppies end up tethered in a backyard and ignored come summer? Too many to count.

Chaining a dog was federally classed as inhumane over twenty years ago, but dogs across the nation are still being subjected to embedded collars, strangulation, starvation or left to die in hurricanes and floods. Although two decades have come and gone since chaining was deemed inhumane, only 21 out of the 50 states have anti-tethering laws in place.

In Defense of Animals is taking a stand to end the abuse of chained dogs with their Federal Break the Chains Campaign. Campaign Director Doll Stanley in Mississippi has rescued, rehabilitated, and found families for previously tethered dogs. She has also made strides in lobbying to have no tethering verbiage added to local ordinances.

Although there are currently 21 states addressing canine tethering at the state level, and some counties and cities that address it on a local level, in many cases the legislation is place is weak, full of loopholes, and gray areas which make it difficult to enforce. In Defense of Animals’ strategy is to first start with amending California’s statewide law, then begin steps to push for a federal law.

How are they going to achieve this?  Mainly by collaborating with other animal welfare groups, animal control officers, and pro-animal legislation. They also plan to extract all the humane components of existing statewide laws and local ordinances and compile them to one master bill to be applied to all states.

The USDA stated in their Federal Register Volume 1, Number 68 on July 2, 1996, “Our experience in enforcing the Animal Welfare Act has led us to conclude that continuous confinement of dogs by a tether is inhumane.” This philosophy is shared by animal behaviorists, veterinarians, the ASPCA and various other scientific studies which have all proven that tethering and chaining a dog leads to aggression in the dog, injury to the dog due to a tether restricting the dog’s movements and causing them to become entangled. Tethering also causes the dog, naturally a pack animal to experience a feeling of isolation. Chained and tethered dogs will often bark and howl incessantly to reunite with their pack.

Statistically, chained dogs are more dangerous than packs of free roaming dogs. If the USDA, deemed canine tethering as cruel back in 1996, what has been done to alleviate their suffering since then? Why are dogs still suffering and dying at the end of chains?

In Defense of Animals knows it’s time to bring an end to this barbaric practice once and for all. They have vowed to not stop until they break the chains to free all our nation’s dogs. It will be a long, uphill battle. To help In Defense of Animals with their Federal Break the Chains Campaign visit their website 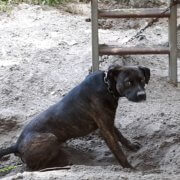 Jail time for man who bought dog online before killing and feeding to another...