You are here: Home1 / News2 / Dogs3 / dog abuse4 / Woman sentenced to jail after ordering back leg of her dog cut off
Spread the love
Tweet

In her second animal cruelty conviction, a woman from Oyster Bay was sentenced to a year in jail after conspiring with a veterinary office worker to cut off the ears and back leg of her pit bull puppy, named Miss Harper, reports Newsday. 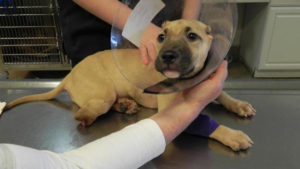 Appearing before a judge in the Nassau County Courthouse, Wednesday, August 3,  Shawana Hughes, 40, also received a five-year ban on owning animals and five years probation. According to court records, in July 2013, Hughes and her estranged husband Lee took their seven-month-old puppy to Reginald Smith, 33, a veterinarian technician to cut off the dog’s ears with scissors. To keep the dog from scratching, they tied socks on her feet secured with tight rubber bands which hindered the blood flow to the puppy’s legs. They then ordered Smith to amputate one of the dog’s legs.

The Hicksville Patch reports Lee Hughes, 42, pleaded guilty to two counts of unlicensed practice and aggravated cruelty to animals. Like his ex-wife, Lee is banned from owning animals for five years after his one year prison sentence. He must register as a convicted animal abuser and was ordered to pay $12,000 in restitution to the Nassau County SPCA for Miss Harper’s medical expenses. Smith was sentenced to a conditional discharge.

When the friendly puppy’s horrible story hit the media, thousands of people as far away as Australia offered to adopt her from the Nassau County SPCA. She has since been adopted and is living a charmed life with another pup in her Long Island home. Although it was planned to fit Miss Harper with a prosthetic leg, her energy and playfulness precluded that having been a choice, however she gets along fine on three legs. What a happy ending for a puppy whose life started out so tragically.

(Photo courtesy of NCSPCA) No part of this article can be copied or rewritten in part or full without the express permission of Pet Rescue Report.)