You are here: Home1 / News2 / Dogs3 / dog rescue4 / Starving Cocker Spaniel so scared he would rather starve than come out...

One can barely imagine what must have happened to an emaciated little Cocker Spaniel, who had been so frightened to even move, that he hid under a house off the streets of Los Angeles and nearly starved to death. Had it not been for a Good Samaritan who took a picture of the dog and sent it to Hope for Paws, the little dog’s fate may have ended tragically. 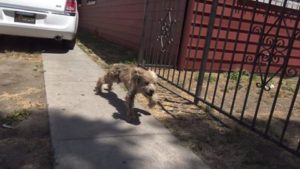 Eldad Hagar, and his assistant Lisa Arturo, headed out to find the desperate little pup.  Dubbed Amos by his would be rescuers, the panicky pooch took off in a desperate jaunt to escape. As Lisa slowly offered him bits of a cheeseburger however, Amos couldn’t refuse; his days of being a scared stray were nearly over – Eldad’s lucky leash had caught Amos in mid-flight as he tried to escape.

“Usually a dog under such extreme stress refuses to accept food once captured, but this was not the case with Amos… he was so hungry!,” Eldad wrote on the organization’s Facebook page.

And with the powers of a cheeseburger aiding in Amos’ rescue, in coordination with the devotion and perseverance of Hope for Paws, baths, medical treatment and grooming, another homeless dog has a future. 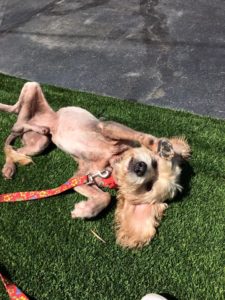 He is now with  Add to Your Family. ADOPT Animal Rescue Team, is available for adoption and is described as a “perfect dog for any family.” Amos is five-years-old, loves everyone he meets, walks well on a leash and adores playing with children.

(Photos and video courtesy of Hope for Paws.)