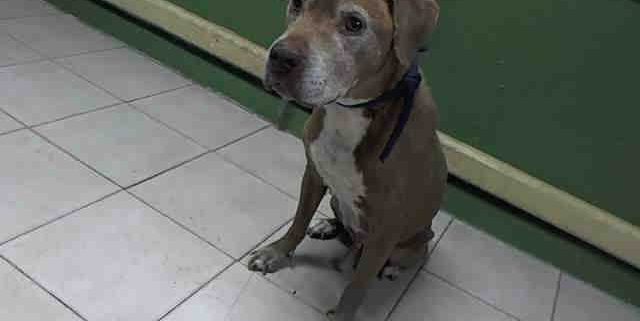 A senior dog named “Wally,” is missing. The nine-year-old pit bull mix was at the Carson Animal Services facility where he was held for a period of time before being adopted…and then returned just one hour later.

Wally was once again held at the facility and then things seemed to be on the upswing when he was adopted again on December 5. Tragically, shortly after being adopted from the animal control agency, Wally managed to escape from his new owner, who was en route to a pet store to buy some new “gear” for the senior dog.

Wally, a 9 year-old pit bull, was adopted from Carson Shelter on Monday, December 5. As his new owner was driving to Petsmart to get him a new collar, leash, toys, etc., Wally stepped on the window button, rolled the window down, and jumped from the car.

Please keep an eye out for Wally – he was last seen near the bottom of the Alameda off-ramp of the Eastbound 91 freeway in Compton. Anyone who has spotted Wally is asked to call 480-815-2705.

Decorated veteran, author of book about his service dog, found dead in hote...