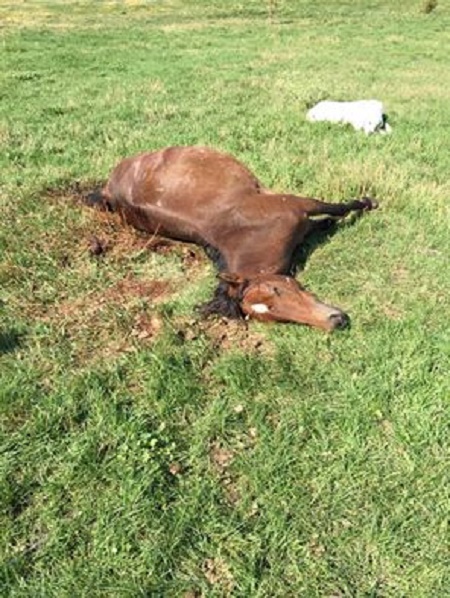 On the day that a pregnant mare named “Dee,” was supposed to be adopted, she was discovered with fatal stab wounds. The body of the six-year-old mare was found on August 20 in a pasture near American Falls, Idaho, reported the Idaho State Journal (ISJ).

Dee was a rescued horse, one of several wild horses who had been living near Yakima, Washington and who were destined for a slaughterhouse, but were rescued instead.  Now, those who wanted to see her embark on a new life, after being spared from certain death, are hoping to bring justice for her untimely demise.

On the GoFundMe site created to help raise funds for a reward, the cruel incident is described in painful detail:

She was waiting for her adopter to arrive that morning, when she was brutally stabbed to death.   Her initial wounds did not kill her and she traveled across the field, only to be tortured again until she died.
We need $5,000 as a reward for the person (or shared by persons) who provide information leading to the ARREST & PROSECUTION of the monster(s) who did this.

Dee was being held on a ranch called A Little Piece of Heaven. Ranch operator Kim Clark described Dee to ISJ, “She liked to play in the sprinkler, like a dog. She would bite at the water and jump around it, and she would eat out of your hand. She just seemed to like people.”

Anyone with information about this crime is asked to reach out to the Power County Sheriff’s Office at 208-226-2311.