What are the odds that a California Highway Patrol officer responding to a call about an injured bird is a former falconer, but Officer Tony Griesemer was quick to respond to help an injured pelican, reports the Sacramento Bee. 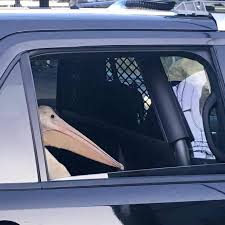 On Tuesday evening, CHP received a call about the hurt bird perched on a hill beside the freeway along the westbound Interstate 80 in Truckee. And as Officer Griesemer approached the bird, it flew off barely avoiding getting hit by an oncoming car heading in the opposite direction. The bird appeared to be very tired, but not injured.

“He looked tired from flying, so I knew I could get a hold of him,” the officer stated. “This isn’t the first bird I’ve caught. I knew what to look for, how he was going to react and how he would try to defend himself,” stated Griesemer.

So soon came the question what to do with a tired pelican? And then the bird was placed in the back seat of the officer’s patrol car. Look a little bit suspicious? Was the officer afraid the pelican would “fly the coop”?

It’s not the first time, highway patrol officers have rescued wild life, even though it’s not particularly in the job description, but deer, birds, bears or other denizens of the forest could pose a danger to the safety of motorists. Officer Griesemer has had previous experience – wore heavy gloves and knew how to handle his long beaked new friend.

The good news? The pelican was driven (not flown) to the Truckee Police Department animal shelter before being picked up by a wildlife rescue team. No humans or wildlife were injured during the rescue.