A defenseless puppy fell to his death in Las Vegas after being thrown off a third story balcony because he urinated in the home, reports Channel3LvNews. On Tuesday, the suspect accused of the heartless, act was arrested and is currently behind bars at the Clark County Detention Center. 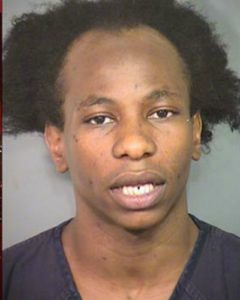 Danny Webb faces two felony charges for animal cruelty after allegedly throwing the tiny  puppy off the third floor at the Sportman’s Royal Manor Apartments, located off of Tropicana Avenue. Webb was arrested amid  cheers from neighbors as Metro detectives handcuffed the suspect.

The scene was tragically described by neighbor Diane Winston who watched helplessly as the puppy fell to its death landing on the concrete sidewalk after hitting a tree. Another neighbor rushed to the pup’s aid and cradled the crying  dog in her arms wrapped in a towel. And as the neighbors gathered around and cried for the puppy,  Webb stood outside  of his balcony yelling.

“You guys can take care of this dog. I’m done taking care of him,” Webb screamed as he threw a bag of dog food down to the ground near where the dying puppy had landed.

The arrest comes three weeks after the incident. According to Fox5Vegas news, animal advocate Gina Greisen, the delay in Webb’s arrest was due to the Metro Animal Cruelty Unit not having the resources to keep up with the number of animal cruelty crimes reported. Only two detectives make up the unit,  and they are inundated with similar cases.

“We want to see judges start handing down harsh punishments. The punishments needs to fit the crime,” stated Greisen.

The dog’s injuries were so severe, he had to be euthanized by a veterinarian. If found guilty of the felony charges, Webb faces a maximum of four years in prison and a $5,000 fine. Let’s hope the judge listens.

Fears abound that Craigslist cat killer might be killing again Darla is home: Child who locked her dog in bathroom to keep her safe
Scroll to top