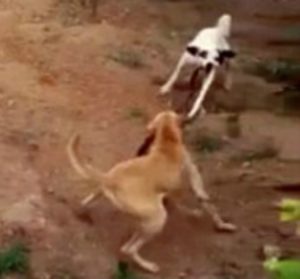 Two loyal dogs from Salem, Tamil Nadu, located in the south of India, saved their family from an aggressive rat snake by tearing it apart in a  protective tug-of-war, reports the Daily Mail.

The family had been relaxing at home when they spotted  the five-foot snake slither into their living room. The two dogs, with their quick reactions, were able to grab the snake and tossed it up into the air. Then each dog grabbed one end and pulled at it for approximately 15 seconds before the snake snapped in half. 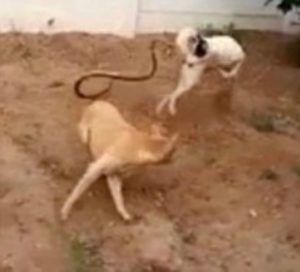 Then it became a game; perhaps with the two dogs playing tug-of-war.

The snake, identified as a pytas mucosa can grow to ten feet in length and is known to become aggressive when protecting its territory. Thankfully the snake was not poisonous, but statistics in India still reflect many people dying from snakebites. And as if there are already pages and pages of reasons to revel in the company of “man’s best friend,” add protector against dangerous wildlife in Asia to the growing list.