In Bowling Green, Kentucky a man driving his truck after having been involved in an argument, has been arrested for dragging his dog for 15 to 20 miles tethered behind his pickup truck, reports WbkoNews. 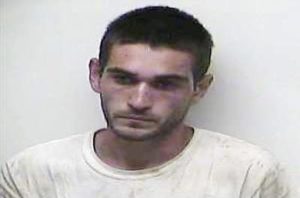 According to Edmonson County Deputy Jordan Jones, the driver of the truck and owner of the dog, Calvin Dennis, has been charged with animal torture, driving while under the influence and associated drug charges. Jones called the situation “one of the most gruesome things he had ever seen in his life.” As Dennis sped away from the parking lot on August 6, onlookers were shocked as the leashed dog became entangled behind the rear axle. By the time, Dennis pulled into the parking lot of the Chalybeate Fire Department, nearly 20 miles away, police referred to the scene as one of the worst they had ever seen.

It had been an off duty police officer who first spotted the dog being dragged and called 911. The officer tracked the egregious situation by following the dog’s trail of blood.

“There was a collar that was attached to the leash, connected to the back of the truck. It was wound so tightly that the neck had broken. The bones had ground down to where you could actually see the bone marrow. He put an innocent dog at risk for no reason. If you’re going to take your dog to work or anywhere like that, you’re responsible for that dog at all times,” stated Deputy Jones.

When questioned, Dennis stated he forgot his dog had been tied to the rear of his truck. Authorities state he admitted to taking pills and methamphetamine before driving.  Dennis is facing up to five years in prison on the animal torture charge alone. Since the dog died as a result of the animal cruelty turns the charge into a Class D felony.

Rest in peace poor dog. We hope you get some justice.