You are here: Home1 / News2 / Dogs3 / dog news4 / 12-year-old Prince left behind at shelter as his owner moves on
Spread the love
Tweet

In Long Island, New York, Prince, a 12-year-old purebred black Labrador retriever was surrendered to the Brookhaven Shelter on Monday. 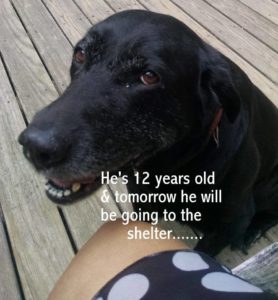 For years over his first decade, Prince’s routine had been predictable; beginning with his morning walk, his breakfast and then of course his usual comfortable nap in his soft bed. And when his owner grabbed the leash and together they walked towards the car, Prince became excited – car ride – how much fun is that? In Prince’s mind he imagined they were headed to the park or maybe to a friend’s home. It didn’t matter – it was an adventure with the person who meant the most to Prince in his entire life. Tragically, when they pulled up at the shelter, Prince instinctively knew this was  a place he didn’t want to be.

Terribly frightened, confused and greeted by the cacophony of 90 other dogs waiting to be noticed and wanting a home, Prince’s owner removed his dog’s leash, walked out the door and there it was – another dog left behind – his heart broken into a million pieces when his human companion never turned around nor waited for Prince to get back into the car. Who can explain to Prince he did nothing wrong? According to his owner, he was moving into an apartment and no dogs were allowed. How does that help Prince?

A Facebook page for Prince can be found here. Volunteers from the group, Desperate Dogs of Long Island describe Prince as follows:

“Prince has lived with children of all ages, and he is friendly and social with all he meets. He does well with other dogs, and if you own other dogs, a meet and greet with your dog is required. He is available through Brookhaven’s foster program, where all medical if needed will be covered. He is also available for adoption. A shelter is no place for any dog, much less a senior- please share his story widely….and let’s find Prince…his angel.”