You are here: Home1 / News2 / Seager Sagas3 / Introducing the Seager Sagas – a day in the life of a mischievous...
Spread the love
Tweet

In early May, our family welcomed a rescued puppy named “Seager,” into our lives. Seager, a German shepherd, flew from San Diego, California, to Seattle, Washington, in the company of my sister, who happened to be vacationing in the area at the same time that Seager needed a lift north. 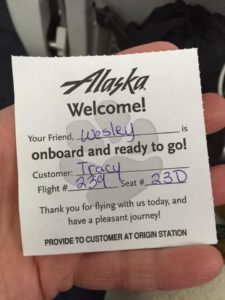 Seager (who came to us with the name “Wesley”) was given his new name by my son, Andrew, who is a fan of the Seattle Mariners (older generations tend to think of singer Bob Seger when they hear the name). The three-and-a-half-month-old pup was a trooper on the flight, as well as the trek home from the airport. Suffice to say, when we walked through the door after midnight, we were all exhausted.

For the next couple of weeks, Seager was exceptionally mellow – apparently traveling, getting a new family, meeting a new canine sister (Chesney, also a German shepherd), and non-stop growing, was making him want to do nothing more than sleep all day, and all night.

The days of marathon napping have since subsided and now he is full-on rambunctious puppy. Seager is a character – he has tons of personality and without a doubt, he is the most vocal dog that I have ever encountered.

In fact, on a recent outing to a popular park, a mother and her two kids stopped to meet Seager and his non-stop yipping and whining prompted her to encourage me to not only capture video of him, but to create a Facebook page to chronicle his silly antics. 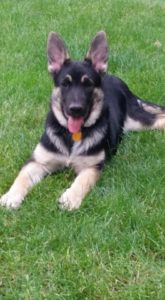 The Seager Sagas will be a regular part of the Pet Rescue Report – you, the fortunate readers, will get to read all about Seager and his puppy drama. We could all use a bit of levity in our lives…stay tuned!

The Seager Sagas – we’ve got a talker on our hands!
9 replies

Shepherd languishes on side of road with serious injuries until he is rescu... Victim of bear attack, stray pup struggles to survive
Scroll to top