A nine-year-old family’s beloved American Bulldog was discovered stabbed to death near his home last week in Liverpool; the dog had been stolen from the family’s private garden, reports the Liverpool Echo. 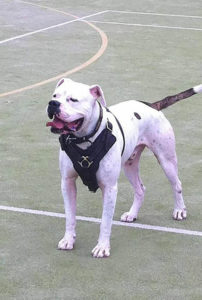 According to the RSPCA, the dog named Turbo, was taken from his home on August 24, lead to the entrance of nearby Walton Hall Park, stabbed three times in his head and his side, and then dumped back at his home. Turbo’s owner, 60-year-old Ann Patterson, brought him up since he was just a tiny puppy and described her dog as loving to roll around with her grandchildren and friendly to everyone he met.

“This was premeditated; they planned to kill him and that’s what make it so sick,” Ann told Express News.

Ann had been on vacation when her dog was killed, however Turbo had been in the care of her son Anthony. When a child knocked on the window of the home, she told Anthony it appeared Turbo had been hit by a car. It is believed the attacker lifted a fence panel in the yard to grab the dog by his collar and lead him away. Trails of blood were discovered at the entrance to the nearby park. The dog’s body was then left behind the owner’s fence. Rescuers tried to resuscitate the dog, but it was too late.

RSPCA officials are asking the public for help.

“…This is a very sad incident and it has left Turbo’s owners devastated. Turbo would have suffered a great deal in this attack and we would like to find out who did this to him,” stated an RSPCA spokesperson.

Meanwhile the Merseyside Police are working on clues with the RSPCA hoping to find out who could have done such a horrible and heartless crime to a gentle dog who loved everyone.  Anyone with information is asked to contact 0300 123 8018.

City workers use official vehicle to tie up dog and drag it through the streets... Outpouring from community offering to rescue dog her owner tried to drown in...
Scroll to top