You are here: Home1 / News2 / Dogs3 / dog abuse4 / City workers use official vehicle to tie up dog and drag it through the...
Spread the love
Tweet

Two council workers in Buenos Aires have been fired for a disturbing act of animal cruelty after they were videoed by a passer-by dragging a dog behind their official city vehicle, reports the Daily Mail. 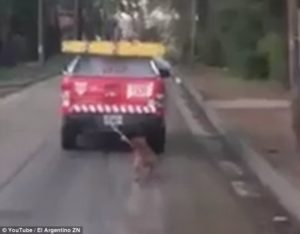 A motorist used her mobile phone to capture the terrified, one-year-old pit bull tied to the bumper and being dragged through the suburb of Tigre. The dog tries his best to keep up, but as the vehicle accelerates, the dog is dragged along the ground. Miraculously the pup survived and only suffered from minor cuts and bruises.

As to the workers, both men have since been fired.  According to Tigre’s Mayor Julio Zamora they will face animal cruelty charges with the mayor agreeing he shared everyone’s disgust at animal cruelty. The men worked for the council-run business COT involved in CCTV cameras. Their names have not been released.

It is not known why the men mistreated the dog. Rescuers involved in the dog’s recovery describe him as being very affectionate and loving. He will be available for adoption if his owner is not found.