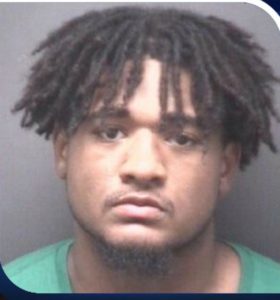 On Friday, Darius K. Commissiong, 21, was cut from the Pirates’ roster shortly after authorities were called to a domestic disturbance on Thursday night at the Wesley South Apartments. According to police reports, an unidentified woman’s tiny dog had died from apparent extensive injuries. Witnesses were able to give authorities a description of the person leaving the scene when the disturbance was reported. Commissiong and the woman  were acquainted, however no other information has been released as to their relationship. Commissiong was arrested Friday afternoon.  The Greenville Police Department’s Special Victims Unit and Animal Protective Services Unit are continuing their investigation.

A necropsy revealed the dog sustained three broken ribs, a collapsed lung, hemorrhaging in the abdomen and injuries to the left eye, brain and other parts of the body. In addition, the puppy suffered from a broken leg, several broken teeth  and a fatal tear to her liver as a result of blunt force trauma.

On Friday, ECU head football coach, Scottie Montgomery, announced Commissiong, a junior defensive lineman had been cut from the team. He had been a projected starter for the season. According to a statement released by Montgomery, conduct such as this will not be tolerated:

“While we always want to be in a position to guide young people, unacceptable behavior such as this clearly crosses the line of humanity and simply will not be tolerated. There’s a  level of accountability which defines our program, athletics department and East Carolina University, and any conduct which isn’t congruent with those values is unwelcome here.”

Commissiong was booked into the Pitt County Detention Center in Greenville in lieu of a $25,000 secured bond.