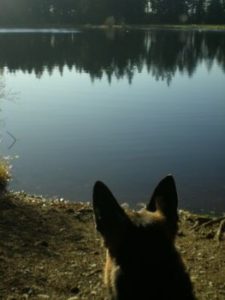 here aren’t many dogs who don’t enjoy a day at the water. Bounding after a stick or ball, splashing, swimming…in general having a blast in the great outdoors. The possibility of a lurking danger is most likely the furthest thing from most dog owner’s minds.

However, there is a toxin that every dog owner should be made aware of. Blue-green algae can form in any water, but is most visibly apparent in water that is not moving, or stagnant. The algae can cause the water to turn green, and surface scum is often seen.

Blue-green algae is actually a form of bacteria – if ingested, it can make humans or dogs, ill, or it can even cause death. If water is known to be contaminated by the algae, it should not even be allowed to get on the skin.

Lakes in public parks are frequently shut down when the toxic algae is found.  Right now, Connecticut’s New Fairfield Town Park is closed due to the presence of the toxic algae, reports Wednesday’s News Times. A large portion of southern Florida is currently experiencing an unprecedented number of toxic blue-green algae blooms. The slimy, foul-smelling sludge has local residents up in arms over the contaminated waters and beaches.

Take care when you visit a lake or pond – if you see a slimy green sludge on the water’s surface, steer clear and check with your local health department before attempting to enjoy a watery outing.

According to Pet Poison Helpline, dogs who ingest blue-green algae may experience the symptoms including:

“as published on Examiner.com“

Dogs 101: What to expect from your newly adopted dog 2 medical students arrested for throwing puppy from roof
Scroll to top