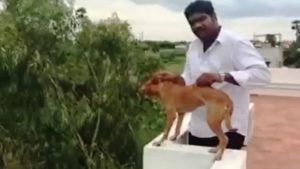 A disturbing 33 second video, shot in slow motion showing an Indian man throw a dog from a two-story terrace in the southern city of Chennai, sparked international outrage. Both police and animal advocates actively searched for the men; the medical student who threw the dog and another student thought to have filmed the horrendous deed. Posted on Facebook, Twitter and WhatsApp, a frightened puppy is shown whimpering as the puppy is held by his neck, and the man stares at the camera.

On Wednesday, the students were arrested and when questioned by police stated they threw the dog and videotaped it “just for fun.”

According to Mashable, Gautam Sudarshan, who threw the dog from the roof in the video, and Ashish Paul, who shot the video, are final year students at a medical college in Chennai. The two had been hiding out since the video went viral on social media in the last two days, however the video was alleged to have been shot two weeks prior.

As for the five-month-old puppy, she has been rescued and is currently being treated for fractures in her hind leg and spine at the Tamil Nadu Veterinary University Hospital. The men have been charged with animal cruelty and immediately released on bond sparking even more public outrage. 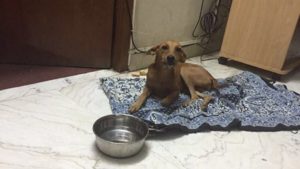 The video is very disturbing and may not be suitable for all viewing audiences.