In Bridgeport, Connecticut, an 18-year-old dog walker faces animal cruelty charges after he was caught on camera kicking and beating a dog, reports the CTPost. 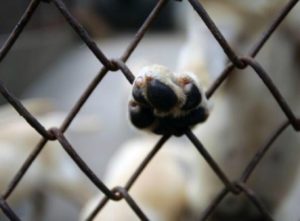 Xavier Surles, 18, was seen on cameras walking near Interstate 95 repeatedly abusing a black dog. On August 17, a motorist contacted state police, stating he had witnessed a young man beating up a dog along the roadway. When authorities checked surveillance cameras in the location, they saw Surles holding the dog’s leash while kicking and repeatedly beating the dog as the animal cowered in fear. The dog did not fight back nor appear aggressive.

As police approached, Surles became abusive and resisted arrest. The friendly dog named Grizzly belonged to a disabled man who paid Surles $10 a day to walk his dog.

Surles was released on $5,000 bond. Lucky Grizzly was rescued before Surles had time to really hurt him. If only dogs could talk…

Rescuers have less than 3 hours to save friendly shepherd from being euth&#... Puppy missing after rollover crash
Scroll to top