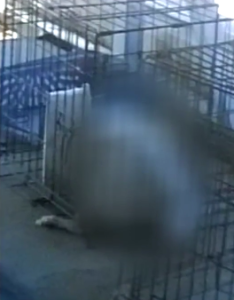 Over the weekend, a dog died after being left inside of a small cage, with inadequate food and water, at a California animal control agency. According to Tuesday’s KMPH Fox 26 News, the heartbreaking discovery was made by a rescue volunteer who went to the Parlier Animal Control agency on Sunday to pick up a dog.

In an ABC 30 News report, Chief José Flores, Police Chief with the Parlier Police Department, commented on the situation at the facility which is under his control, “There was some miscommunication, because our officer believed that the dog was taken earlier and that’s why the dog sat here for almost three days with not enough food, not enough water, and that’s why the tragedy occurred.”

The dog’s death was shared publicly on Facebook and outrage quickly ensued. The tragedy has prompted changes at the facility to ensure that a fatal miscommunication does not happen again. According to Your Central Valley News, rescue agencies will now have to visit the animal control agency on specific days of the week when staff is present – guaranteeing that transfers between animal control and rescue organization volunteers takes place face-to-face.