In Fife, Scotland, a sicko was caught on video carrying out a “disgraceful act of cruelty” after repeatedly striking a two-year-old cat and then forcing the cat’s head into his mouth and biting down, reports the Express. 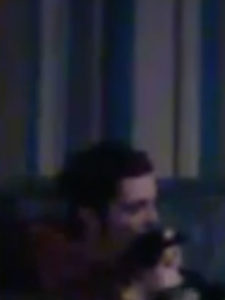 Craig Mills, 22, originally from Lumphinnans, was secretly filmed by his then partner, David Walker, in a series of disturbing incidents occurring between April and September 2015. Mills, unaware that his disgusting actions were being recorded,  grabbed the family cat by her neck and struck her with his hand. As the camera pans into the background, more blows were delivered, the cat was then thrown against the wall, and after the ninth time, Mills screams at the terrified cat named Pippa yelling:

“Who are you hissing at?”

And then in an even more depraved act of animal cruelty, Mills forces Pippa’s head into his mouth and bites down. Pippa was able to escape – possibly lashing out at Mills and scratching him in the face. According to the Courier, Mills pleaded guilty and admitted “acts of cruelty against a family cat, Pippa, in that you did restrain said cat on your knee, distressing it, and cause it to urinate, thereafter repeatedly punch and slap said cat, put its head in your mouth and bite it, forcibly throw it against a wall and kill said cat.”

In court on Wednesday, the defense lawyer for Mills stated his client had been diagnosed with an “unstable personality disorder” calling Mills a “broken man” who suffered with alcohol and marijuana addictions. The defense attorney continued by stating Mills has recently reformed.

Sheriff Craig McSherry would have sentenced Mills to the the maximum punishment of 12 months in jail, but because of the guilty plea, was forced to reduce the jail term to eight months. More charges on another crime however, incurred an additional six months of incarceration.

Animal protection organization, One Kind, thought the punishment should have included more:

“… The fact the judge handed down the maximum jail sentence available to him reflects the severity of the case so we are deeply disappointed the court didn’t see fit to impose a lifetime ban, or any length of ban, on keeping pets…Given the level of violence involved in this case, it seems wholly inappropriate that Craig Mills should be free to own pets again…”

19 cows die while trying to seek shelter from storm