You are here: Home1 / News2 / Dogs3 / dog abuse4 / Couple arrested for neglecting dog who was tied to tree
Spread the love
Tweet 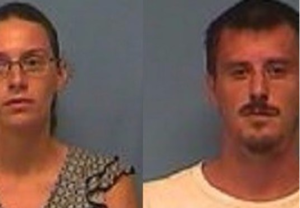 Two people in Arkansas are facing cruelty to animals charges for allegedly tying a dog to a tree and allowing the dog to suffer with a severe infection. According to Wednesday’s THV 11 News, the alleged dog abusers, identified as 31-year-old Tommy Wayne Stratton, and 28-year-old Lisa Burnett, were taken into custody on Monday.

In early July, an officer with the Alexander Police Department responded to property on Iris Cove after a report was received about a neglected dog who was tied to a tree next to an RV. The police officer found a dog who appeared to be in “extreme pain,” suffering with an untreated infection that had caused the dog’s head to swell to several times its normal size.

The dog was not taken from the property, but the couple was advised to get the dog to a veterinarian for care. When the police officer returned three days later to check in on the dog, the couple, and the dog in question, were gone.

An investigation revealed that the couple had surrendered the ailing dog to the Bryant Animal Shelter, rather than taking him to a veterinarian for care. A warrant was secured and the couple was arrested and later released on bond.

No word on the fate of the neglected dog.

Atlanta man who set off fireworks to scare his dog fined $500 Surrendered back to shelter at nearly 15-years-old, dog’s face shows her...
Scroll to top