You are here: Home1 / News2 / Dogs3 / dog abuse4 / Atlanta man who set off fireworks to scare his dog fined $500
Spread the love
Tweet 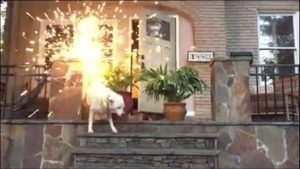 On Tuesday, animal advocates gathered outside of the Fulton County, Georgia court building as dog owner William Scaffidi pleaded no contest to animal cruelty charges for igniting fireworks in front of his dog, reports AJC News.

The judge allowed Scaffidi to keep his dog named Betty Boop, but fined him $500. Protesters wanted a stiffer sentence for the crime sending the message that animal cruelty can not be tolerated.

On July 4th, a viral video filmed by Scaffidi’s  teenage daughter showed the distressing scene. More than 78,000 people viewed the disturbing video showing the man gingerly tiptoeing around the front porch, preparing fireworks to ignite, while the white dog looked suspiciously at his owner. The dog was apparently much too trusting of his heartless human. And then the man carefully closed the front door. Moments later the first set of fireworks ignited – the dog ran for cover, and as he tried to hide while he whined aloud in fright and confusion, another blast went off … this time laughter could be heard in the background as if the heart wrenching situation had been viewed as funny by the participants inside the home.

Scaffidi stated he regretted what happened and claimed he didn’t know the dog was there. Read the earlier story here.