Less than one week ago, 26 dogs were rescued from a the home of a couple affiliated with a Wisconsin dog rescue. According to the Racine County Eye, the couple who volunteered for Lucky Mutts Rescue are identified as 63-year-old Terry Bogard and 33-year-old Heather Jensen – both were arrested and 26 dogs were seized from deplorable conditions inside their home in Racine. 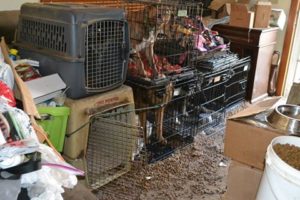 On September 12, the rescue agency posted an update about the concerning situation to Facebook followers:

Lucky Mutts Rescue followers…..There are several social media outlets reporting information about our former President, Heather Jensen. We were made aware of this situation at Heather Jensen’s home on Friday late afternoon. At this time, she was immediately removed from her position as President of Lucky Mutts Rescue and removed from the rescue itself.

On September 13, the Wisconsin Humane Society updated its Facebook followers about the rescue effort:

On Friday, September 9, we responded at the request of the Racine Police Department and Racine Health Department to assist in a seizure of 24 dogs from a single residence. Our staff worked swiftly to remove the dogs from these conditions, and we can’t possibly thank you enough for the support that makes it possible for us to do this lifesaving work.

Dogs kept at the couple’s home were existing in squalid conditions – the dogs were reported to be held in cages which were too small. The home was filthy, with urine and feces and a lack of adequate ventilation, reported Fox 6 News.

Jensen and Bogard were taken to jail – 24 of the 26 dogs were taken in by the Wisconsin Humane Society and 2 dogs were released to the custody of the couple’s family.

Dog at daycare nearly dies after eating bag of heroin