The Cape of Good Hope Society for the Prevention of Cruelty to Animals were made aware of a disturbing act of animal cruelty on Friday, allegedly involving eight children between the ages of 7 to 17, reports Eyewitness News. A graphic video was sent to the organization and uploaded on Facebook.

According to Tara McGovern, a spokesperson for the animal rescue organization, the incident occurred earlier this month in a field in Manenberg. The video shows a group of kids dragging a stray little dog by a rope tied around the small dog’s neck to a secluded area. As they drag and kick the frightened little pup, they shout “this dog is going to die today.” With them the boys lead a pit bull ordering that dog to attack the tiny puppy. The pitbull attacks the dog, and as the defenseless pooch tries to get away, the boys grab it, but they weren’t done torturing the animal. It only grew worse when they then decided to hang the pup from a tree and throw rocks and bricks at the terrified little one. 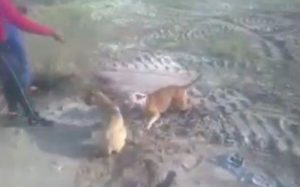 “This is why you must look after your dogs, people,” can be heard shouted by one of the kids.

At the end of the video, the puppy lies on the ground dead.

McGovern says her organization has the names and addresses of the children involved. On the Facebook page of the SPCA, a copy of the dog, named Sam, necropsy report reveals the puppy died a slow, horrific death as a result of blunt force trauma, liver failure, a crushed skull and multiple dog bites. 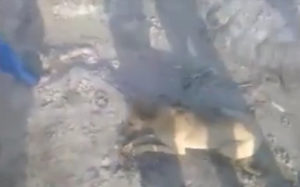 “A case has been opened at the Manenberg Police Station and social workers from the Department of Social Development will render assistance in the hope that these children can be rehabilitated,” added McGovern.

The video can be found on the SPCA page; this writer could not watch it and therefore will not post it here. Rest in peace Sam. We hope you find some justice.