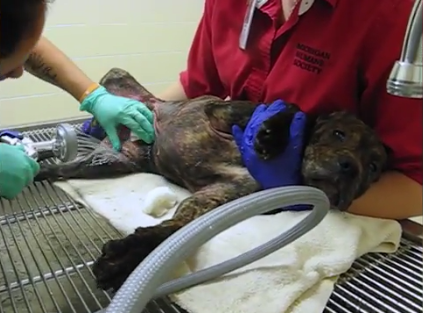 The Michigan Humane Society is pursuing charges against a man who is accused of dragging a puppy down a street in Detroit on July 15. The shelter issued a release,detailing the incident, on Tuesday.

Humane officers were alerted to the disturbing situation by a passerby who reported that a puppy was being dragged and leaving a trail of blood near 8 Mile Road and Berg. When the officers arrived, they found the three-month-old mastiff pup “unresponsive,” and feared that he might be dead.

The puppy was still alive, but injured and terrified – humane officers noted that the pup appeared to have just given up, and allowed himself to be dragged. The man accused of dragging the puppy told investigators that the puppy would not walk on leash, so he started to drag him – the dragging resulted in abrasions over much of the underside of the puppy’s body. 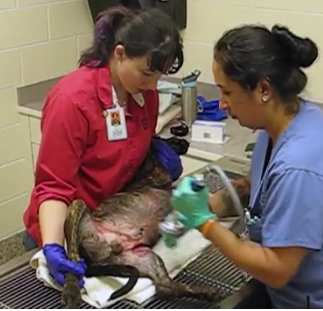 Elise Ramsey, MHS Cruelty Investigator, commented on the pursuit of charges against the puppy’s former owner, “Given that this was an intentional act that could have easily been prevented, we will be submitting charges to the Wayne County Prosecutor.”

The pup, since dubbed “Elmer,” was surrendered by his prior owner and he is receiving care at the MHS Mackey Center for Animal Care in Detroit and will be available for adoption into a loving home once he is healed.

Those who witness an act of animal cruelty or neglect in Detroit, Hamtramck or Highland Park are asked to call the MHS Cruelty Investigation Department at (313) 872-3401.

Surrendered back to shelter at nearly 15-years-old, dog’s face shows her... Owner of cow strapped to flat-bed trailer in cruel photo to appear in court
Scroll to top