You are here: Home1 / News2 / Uncategorized3 / Owner of cow strapped to flat-bed trailer in cruel photo to appear in ...
Spread the love
Tweet

In Appomattox, Virginia, the owner of a suffering cow pictured strapped to a flat-bed trailer in May, will appear in court at the Appomattox General District Court on Wednesday for animal cruelty charges, reports WsetNews. 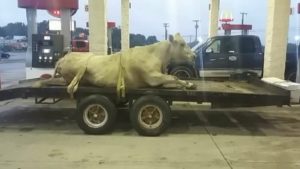 Terry McCoy, the owner of the cow, stopped at the Foster Fuels station in Rustburg when someone snapped the disturbing photo and posted it on Facebook. From there the photo went viral. Initially authorities reported the cow had broken hips and was being transported a short distance to be slaughtered.

“Probably not the best idea you know, pulling up where everybody can see and showing off to everybody, but when it comes down to it, it’s about the only way, the most humane way you could do it,” originally stated Officer Joseph David, of the Campbell County Animal Control Department.

According to follow-up reports however, the cow was never slaughtered. Animal Control discovered the dead body of the cow at a later time on the owner’s property. The animal’s body was sent for a necropsy to determine why it could not walk and how it died. Even local ranchers were outraged at the photo and how an obviously suffering animal was being treated.