You are here: Home1 / News2 / Dogs3 / dog abuse4 / Boxer mama with 2 starving puppies dumped along side of road
Spread the love
Tweet

In Johnson County, Kentucky an emaciated Boxer and her two three-month-old puppies were spotted lying on the side of the road on Friday. Just a small bowl of water sat by their side; leading rescuers to believe the emaciated dogs had been intentionally dumped. 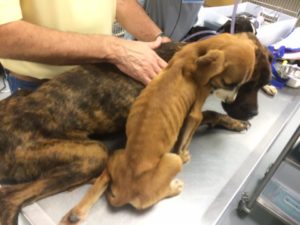 Fortunately, a good Samaritan notified The Arrow Fund, an organization providing medical treatment to Kentucky animals who are victims of extreme torture, abuse, and neglect.The dogs were rushed to emergency veterinarian care.

The mother dog, dubbed Naomi and her two puppies, Wynonna and Ashley remain in critical condition. 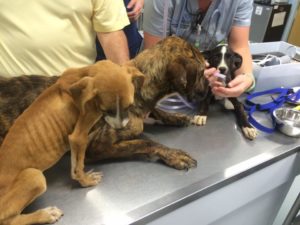 All were placed in oxygen tanks and given life saving blood transfusions. Their body scores on a scale of 1 to 9 are rated at 1 – the lowest number they can be and still be alive. 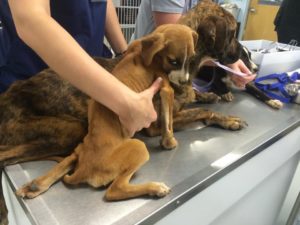 All remain on intravenous fluids until food is slowly introduced into their systems that have been deprived of all nourishment for an extended amount of time. Their updated condition includes the following:

“Day 3 – all have taken a step backwards. The pups, Ashley and Wynonna, after having transfusions upon intake were improving. Now their PCV values (packed cell volume) are dropping again. Ashley, (the dark pup) is at 12 and is currently undergoing another transfusion. Wynonna, (the red pup) and Mom Naomi both have low numbers and may need transfusions as well. They are being monitored very closely. All 3 are suffering from diarrhea. The pups are estimated to be around 3 to 4 months old. Their weight is fluctuating between 6.5 and 7.5 pounds, which is tiny. Their growth was most likely stunted due to malnutrition from gestation to birth to present, and poor mama went through pregnancy and nursing while starving herself. This is just horrid!” 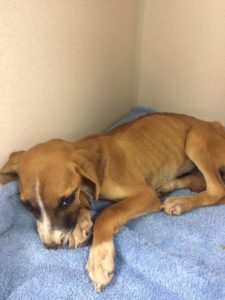 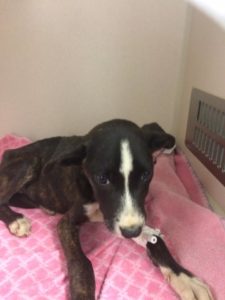 “I want to say the pictures do not really capture how thin these animals are. It is just devastating. But as thin and sick as they are, they try to wag their tails and give us love. Well, now it is our turn as The Arrow Fund and supporters to show them what real love is,” Rebecca wrote to Facebook followers shortly after the dogs were settled in and being treated. “I told them of the love from all over the world for them. This will be a long road of recovery of all. Tests are still being done.” 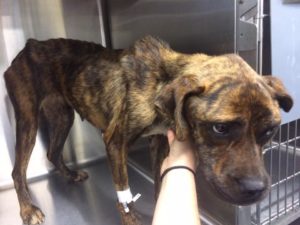 To help with the dogs, donations can be made by clicking here. Checks can also be mailed to The Arrow Fund, P.O. Box 1127 Prospect, Kentucky 40059.

(Photos courtesy of The Arrow Fund)