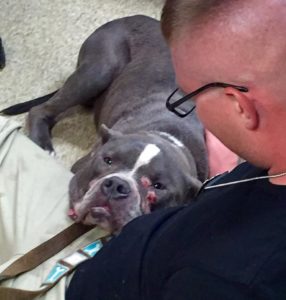 A dog in Ohio managed to not only escape from a horrific situation, but also, survive what can only be described as heinous torture. According to the non-profit organization, Animal Charity of Ohio, a pit bull whose face is marred by wounds and scars was discovered on a porch in Youngstown and the local police department reached out for help.

On Sunday, the rescue agency wrote the following post about the dog, dubbed “Bubbles,” who is currently in their care, “A miracle took place today….this angel escaped monsters!” The group added, “At first glance at the scars on his face you would assume he is a fighter, but with us –all he wants is attention. He keeps going to each of us to be petted and loved. That is when we noticed something wasn’t right. He isn’t giving us kisses. His face touches ours, but that’s it.”

Curiosity over the lack of kisses prompted a peek inside of the dog’s mouth – the finding was shocking. The pit bull’s tongue had been cut out and his teeth filed down; it is believed that he had been used as a bait dog.

The rescue group commented on Bubbles’ demeanor, despite his painful past, “This precious boy holds no grudges and seems to know that he is safe. We are hand feeding him and are amazed at how he has learned to drink with no tongue.”

It is hoped that information about the dog’s owner can be found – anyone who has information is asked to email: acohumane@gmail.com

The group is also asking for donations of canned food – the group indicated that the “chunky kind in gravy” is the easiest for Bubbles to eat. Eventually, Bubbles will also need a home without other dogs. Interested parties should reach out to the group at acohumane@gmail.com

(Photo via Animal Charity of Ohio)