The Fontana Police Department in California are asking for the public’s help in finding the person responsible for intentionally dumping a severely injured donkey in the foothills of the city last week. 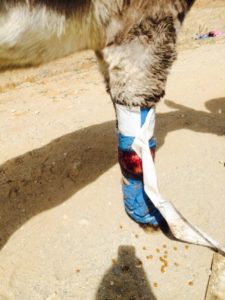 According to Animal Services supervisor with the Fontana Police Department, Jamie Simmons, the elderly donkey had been abandoned late Tuesday evening in an open area near Armstrong Road and Locust Avenue. According to The Sun, several area residents called police for help. When authorities arrived, they found the very friendly animal had an open gash on his left front leg which had been wrapped in duct tape. The burro also had numerous untreated open wounds on his body.

“The donkey was in pretty bad shape and had open wounds all over his body – some smelly infections were seeping out of the wounds,” reported Simmons. “He was a sweetie, but animals have a good way of hiding their pain.” 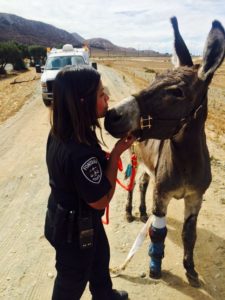 Veterinarians estimated the donkey’s age as ten, but stated his prognosis was poor; the donkey was humanely euthanized on Wednesday.

Authorities have described the animal’s unique harness as having been made of PVC piping and hope someone will recognize the donkey. Anyone with information is asked to call the Fontana Police Department at 909.350.7700. Be the voice for those who cannot speak.