It’s a state of emergency for the dogs of Venezuela. Pet owners barely have money to feed themselves, and when the price of dog food skyrockets to $50 for a 40-pound bag, more dogs are being abandoned and tragically left starving to death on the streets. 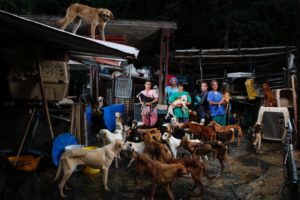 According to Reuters, the unprecedented economic crisis cites the average minimum wage that Venezuelans are earning as $23 a month. How do families even feed their children in such financial straits let alone their pets, and so the country is now witnessing an increase in abandoned and stray dogs. A few makeshift shelters help some of them, and the more responsible and compassionate owners have dropped the dogs off at the Famproa dogs shelter located in Los Teques. 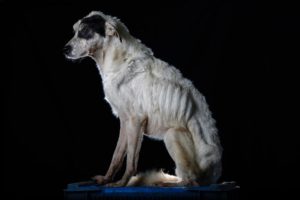 Photographer Carlos Garcia Rawlins captured many of the photos at one of the makeshift shelters run by volunteer Mariea Artega.

“The crisis has hit hard. People are abandoning their dogs because they can’t afford food and because they’re leaving the country,” Artega told Reuters.

Many of the dogs Rawlins photographed in August have since died. Duke, the dog featured on this page had  been left tied outside of the shelter months ago. He lost his life after he escaped from his kennel one night and fought with another dog. 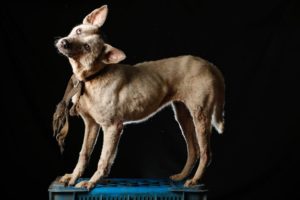 According to Animal News Asia, even police are rationing food in order to feed their K-9 dogs. When systems engineer Maria Rodriguez, 33, said she found a stray dog in Los Teques, her 12-year-old son begged her to keep the dog.

“Sadly our income isn’t enough for us to eat, so how can I give food to two or three dogs?” Rodriguez said, after dropping off the animal at Arteaga’s sanctuary.