In Ephrata, Pennsylvania, a 20-year-old Amish man pleaded guilty on Tuesday in a Lancaster County court to overburdening his horse’s load with a cart filled watermelons and two adult men, causing the horse’s suffering and eventual death, reports Fox News. 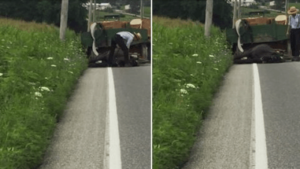 Marvin Sensenig was charged on August 2, with two counts of animal cruelty after the horse collapsed. According to police reports, one count was for kicking the horse in the abdomen and punching it in the head; the other charge was for having the horse “pull a farm wagon with a burden too great for a single horse.”

The investigation began after a photo, taken by a woman driving on Bethany Road, showed an Amish man beating his horse until it collapsed. The pictures quickly went viral on social media. The woman, who asked not to be identified, stated the man beat the horse with what she thought had been a whip. When  she returned a short time later, the horse had collapsed on the road – his tongue was laying on the ground as the man kept picking up the horse’s head by its reins and then letting the animal’s head drop to the road.

Although the horse tried his best to get up, he was too weak. The horse did not survive.

Sensenig paid $300 for each count of animal cruelty plus court costs totaling  $754.00.

Read more of the story here. (Photos via Facebook)

Woman pleads guilty to charge of having sex with dog 2-year-old Mastiff with ‘bait dog’ battle scars barely has will...
Scroll to top