In Ephrata, Pennsylvania a man faces two counts of animal cruelty for striking a horse he “overburdened with a heavy load” on Tuesday, reports the LancasterOnline. 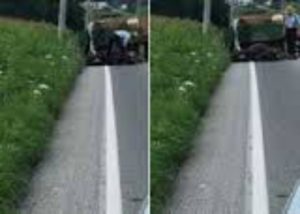 Police responded to the scene on the hot summer morning after reports of a horse collapsing while pulling a wagon loaded with watermelons and two men. According to a witness, Marvin M. Sensenig, 20, who lives on Akron Road, kicked and beat the horse in the stomach and the head.

The investigation began after a photo, taken by a woman driving on Bethany Road, showed an Amish man beating a horse until it collapsed. The pictures quickly went viral on social media. The woman, who asked not to be identified, stated the man beat the horse with what she thought had been a whip. When  she returned a short time later, the horse had collapsed on the road – his tongue was laying on the ground as the man kept picking up the horse’s head by its reins and then letting then letting the animal’s head drop to the road.

According to social media reports, other witnesses saw the horse try his best to get up, but he was too weak and too hot and staggered and fell. Later a machine arrived with a front plow to pick the horse up and off the road. Police reports indicate the horse was euthanized, but how has not been made available to the public.

“Sensenig used one horse to pull a farm wagon with a burden too great for a single horse. The horse became overheated due to the hot temperatures and collapsed onto the asphalt.”

Lancaster County District Attorney’s Office reviewed the case recommending punishment to the fullest extent of the law. If found guilty of both counts, Sensenig faces up to a $1,500 fine and/or 180 days in jail.

Rest in peace horse. What a brutal and cruel way you had to  be mistreated. Let’s hope your memory finds justice.

E-listed dog, still wearing harness she was surrendered in Dubbed laziest dog owner drags his 2 dogs for a walk from his SUV
Scroll to top