Two dog owners in Attala, Alabama were devastated after their family dogs died earlier this month. According to Attala police, a neighborhood man has been arrested and charged with poisoning the tiny Chihuahuas, reports Fox News. 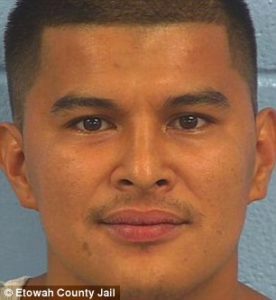 Carlos Enrique Guzman, 27 was seen pouring a liquid from a bottle into the food of two Chihuahuas and then feeding the dogs. The dogs later became ill and died on July 5. Chief investigator, Doug Jordan stated the bottle which Guzman threw into the woods has been found, and preliminary tests indicated the liquid was antifreeze which contains the poisonous ethylene glycol.

It is not known why Guzman allegedly poisoned the dogs, but dog owners need to be ever vigilant when their dogs are outdoors. Letting dogs roam the neighborhood, running off leash or leaving them unsupervised can lead to great harm or cruel, untimely deaths. Although there is no excuse for animal cruelty, people who do not like dogs can do terrible acts.

The dogs’ bodies have been sent to the Jacksonville State University Center for Applied Forensics to confirm their cause of death. Guzman has been charged with felony first degree animal cruelty and has been released on $5,000 bond. Rest in peace little guys. We are saddened that a human let you down.