You are here: Home1 / News2 / Dogs3 / dog abuse4 / Man in China accused of starving dog, then beating him nearly to death... 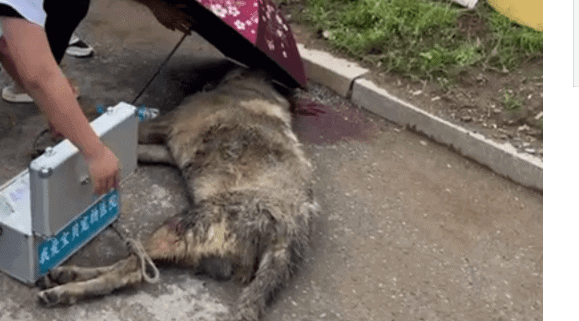 A man in China is accused of locking a dog in a cage and withholding food for days – in desperation, the dog broke free from the cage, and after killing a chicken in an attempt to survive, the man beat him to the brink of death with an iron bar. As reported by the South China Morning Post, the dog was critically injured – suffering broken ribs, teeth knocked out, internal bleeding and skull damage.

The man, whose identity was not released, allegedly tied the dog’s legs together before beating him with the iron bar. The veterinary staff treating the injured dog stated that it was unclear if the wounds were survivable.

The horrible situation was discovered by a neighbor who offered the dog’s owner money to get the canine out of harm’s way.

The man responsible for starving, and beating the dog will likely face to repercussions because China does not have animal abuse laws.

From emaciated, tired and scared, to healthy and handsome – Dean needs...

Cat dumped by owners at shelter after 18 years because they ‘didn’t...
Scroll to top