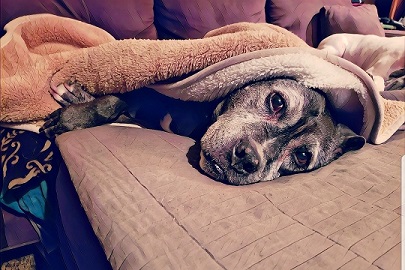 All the most popular films or stories in literature chronicle the hero’s journey. The underdog, who against all odds, ends up triumphant. Joey, a Pit Bull, rescued from a dog fighting ring is literally the underdog who withstood the odds that were stacked against him and survived.

Joey was seized from the second largest dog fighting ring in a very large city (location cannot be disclosed for his safety). From the time he was six weeks old, he was chained to a barrel in a backyard with many other dogs. He never once felt kindness or compassion. All he learned from humans were the cruelty and pain inflicted on him. He lived like this for nine years.

Fortunately, the dog fighting ring was discovered, and Joey and the other dogs were rescued from their prison. However, having lived the first nine years of his life in such unimaginably harsh conditions, he was considered an un-adoptable dog. But Joey’s life was spared, and he had to learn how to be a dog. Trainers and behaviorists worked closely with him.

After nine years of living in a dog fighter’s prison, you would expect Joey to be distrusting, mean and aggressive. But Joey has never displayed any of those qualities.  His adopter, Taryn, who has had him now for almost five years, states he has shown nothing but forgiveness and has proven how inherently good the pit bull breed truly is.

For Joey, life didn’t really begin until almost five years ago when he was adopted. His new mom, Taryn, promised him he would never have to fight again and that she would keep him safe.  But she didn’t know Joey would once again be called on to fight a different kind of battle, the battle for his life.

In October 2018, just after Joey’s 13th birthday he was diagnosed with Lymphoma. This was devastating news to Taryn who knows how much Joey is enjoying his life now; a life that was almost completely robbed from him, a life he deserves. He already survived so much, his mom cannot lose him to this disease. She has made the decision to fight for Joey.

Joey will be undergoing weekly chemotherapy treatments for the next six months. The cost is $642.00 a week. This specific treatment gives an 85% chance that Joey will go into remission.  Without this chemotherapy, he will only last another month, maybe two at the most.

Joey still has so much life left in him. He wants to stay here in the life he truly loves with people who love him. He has human siblings and three other “fur sisters” who adore him and take turns caring for him. It isn’t fair that a dog who endured so much misery the first nine years of his life, whose life didn’t really begin until five years ago must end it now.

There was a reason he survived long enough to be found and rescued. This time he won’t be fighting alone. He is surrounded by love and compassion and people who want to help him.