You are here: Home1 / News2 / Adoptable dogs3 / Last minute save – Shepherd rescued moments after being sedated for... 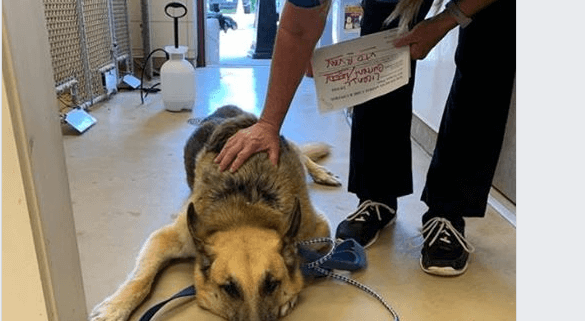 A German shepherd who found himself homeless at a shelter after his owner died was rescued moments after being given sedation for euthanasia. The five-year-old dog was nearly a victim of space issues – it isn’t fair, but surrendered dogs are first in line to be put down when it becomes too crowded.

This particular dog managed to beat the odds which were stacked against him. On Monday, a woman with the rescue group that saved his life wrote:

Today our rescue pulled a German Shepherd from a local shelter. The dog was on the euthanasia list, because of space, and he had already been sedated, as step one of the euth process. His owner had died, and he had nowhere to go. He was one injection away from being killed, all because his owner died, and no one in his family wanted him. How damn unfair to this dog! His owner died, and people were going to kill him. 🤬😢

Another person with the rescue group recounted the dog’s situation:

We’ve pulled dogs off the table before but this has to be the closest reprieve we’ve ever had. He’s a beautiful dog, his owner died unexpectedly on 7/7 and his world has been turned upside down. He’s having a rough time right now but that’s to be expected after the sedation and everything else he’s been going thru. He was surrendered today and was to be euthanized today as well since he was an owner surrender and they are the first to die when overcrowding becomes an issue.

This dog is one of the lucky ones – many are not as fortunate. Today, instead of being discarded in a trash bag, this shepherd is in a foster home through the Heartland Small Animal Rescue. Learn more about this rescue group here.

Firefighters save dog trapped under concrete patio
Scroll to top