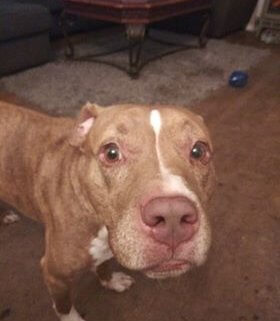 It seems that those who have the least in life are the ones who give the most. Animal rescuer, Lynit Patterson-Sallions, a resident of Bowman, Georgia, has been active in the animal advocacy/rescue world for many years. She has selflessly saved multiple dogs that would otherwise have been killed; all were able to have been fostered, adopted or transported to new homes.  She has never once asked for any payment or financial assistance for her work

Last October, a neighbor abandoned their home and left two pit bulls in the backyard just as Hurricane Michael was scheduled to pummel Florida and Georgia. The two dogs named Coco and Blackie had been neglected for the most part by their previous owners, who kept them chained outside 24/7 in all weather. Sometimes they would even forget to feed them.

Lynit would take the dogs food and give them love and attention which they also craved. When she learned the dogs had been abandoned in the backyard, she put up an emergency post on Facebook begging for someone to help. Unfortunately, although over 1100 people saw the post, no one came forward to take them in. Lynit had no choice but to put them in boarding until a rescue would come forward to take them.

A GoFundMe was set up to collect money for the vetting and boarding bills for Coco and Blackie. Although 1100 people on Facebook expressed their anger at the dogs’ plight and urged Lynit to rescue them, donations trickled in slowly; then stopped altogether. This left Lynit having to pay for most of the boarding bill.

When she could no longer afford to board them, she had to take them in and is now also caring for them along with her other dogs. Coco and Blackie were so happy to finally be allowed to live in a house and not tethered in a backyard night and day. 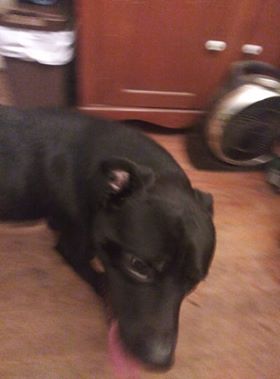 Blackie getting used to his new home

But, unfortunately, for all of her good works and sacrifices, Lynit has had a stroke of bad luck. The vehicle that she relies on to transport dogs and go to work has broken down. To repair it will require getting a whole new engine which will cost approximately $1800. Or, another option would be to purchase a used car for approximately $1800-$2000.

In addition to Coco and Blackie, Lynit has taken in many dogs that would have had little chance of being adopted due to behavioral issues. She has also kept dogs that were abandoned on her property because to her, dumping them back into a shelter was not an option.

Because of having so many dogs in her care, she would also like to get a privacy fence built. It is physically exhausting having to leash walk all the dogs. Lynit would not be asking for help, but rescuing so many dogs has depleted her funds. And, no one ever expects their car to break down.

Lynit wants to continue rescuing and transporting dogs. This is her passion in life. If anyone can help her by donating a used car or donating to the GoFundMe, please do so here  https://www.gofundme.com/urgent-transporter-needs-vehicle-4-dog-transports

You can also help Lynit by shopping on The Pitty Crew’s online store. Proceeds from items bought will also go towards the cost of the transport vehicle and the fence. https://www.facebook.com/Teampages4thepittycrew/