A California animal shelter is seeking answers about a severely injured puppy who was found with head trauma alongside a road in Sacramento County. The Bradshaw Animal Shelter has taken the injured puppy, dubbed Thomas, under its wing.

On March 7, the animal shelter reached out to the public about the concerning situation:

“We are seeking the public’s help to try and figure out what happened to this puppy. He was found and brought in yesterday with trauma to his head – possibly hit with a heavy object. He was found on Peck Drive & Harley Way, near Florin Road. If you recognize this puppy or have any information on what may have happened to him, please send us a message.”

Some people who commented on the shelter’s Facebook post advised that the injury could have been from the impact of a car – the shelter, however, has indicated that x-rays reveal a localized injury, not something that would have resulted from being hit by a vehicle. The shelter wrote:

“You can clearly see where the thick white line that is his skull, is missing at the top of his head. It is a very isolated and localized injury.” 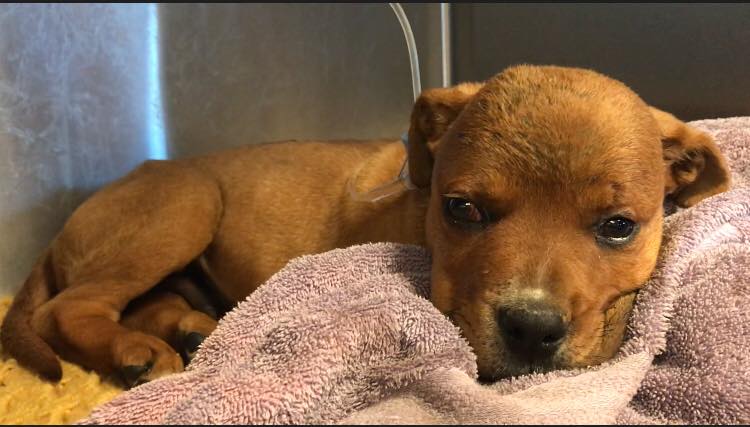 Despite the severity of the puppy’s head injury, he is holding his own. On Monday morning, the animal shelter updated Facebook followers:

“Baby Thomas says good morning (in his quiet, side glance way). Thomas underwent some further testing at UC Davis to provide a better view of his injury. As we knew, he does have fragments of bone in the right hemisphere of his brain. It is an inoperable issue, much too risky. The force also damage his right orbital socket.”

“All things considering, Thomas is doing quite well and his overall prognosis is positive. But we do know he’ll have some lifelong impacts from his injury. We will continue to actively treat him until we feel comfortable that he is ready to move on from our tender care.”

Anyone with information about this puppy is asked to call 3-1-1.

Donations for Thomas’ ongoing veterinary care can be made here.

In other news: Dog returned for being ‘too nice’ has found a loving home