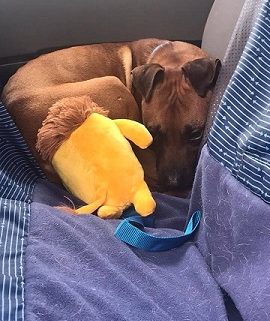 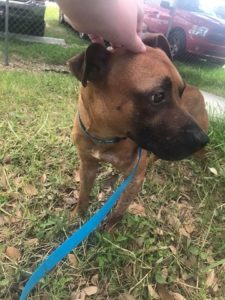 An injured, stray dog was found roaming near an office building in Orlando, Florida. His appearance was that of a dog who had been horribly abused and possibly used as a bait dog. He had scars and wounds all around his front legs.

Kelli Ordonia and several other employees took pity on him. They called Orange County Animal Services (OCAS) who determined the dog was about a one-year old possible Boxer/Black Mouth Cur mix. OCAS took him to their shelter where they ministered to the injuries on his legs. He had to be housed in a separate area because of his fear of other dogs which triggers him to act aggressively.  This behavior is most likely due to previous experience as a bait dog.

Kelli and her friends were concerned for the dog, who they have since named Carder, because OCAS is a kill shelter and they felt with his fear and aggression towards other dogs, he would not stand a chance at being adopted. They decided to search for someone or a no kill rescue to take him in. Once they got him out of OCAS, he was placed at different co-worker’s homes for a few days at a time. None could keep him for an extended period.

Despite being aggressive toward other dogs, Carder is not aggressive towards people. He is more trusting of women than men; a hint at whom is abuser may have been. He starts shaking around men and takes a little longer to calm down.  He is very gentle and would eat out of Kelli’s hand. But sadly, Carder just wants to hide in a small, dark corner where he feels safe and no one can hurt him.

Happy Trails Animal Rescue in St. Cloud, Florida has stepped up to help Carder. They are a 501c3 non-profit animal rescue group. They do not have an actual facility but place their dogs with foster families across Central Florida. Their specialty is dogs like Carder; dogs who have been abused and victims of the worst-case scenarios.  Most of the dogs currently in their care are dogs that have been confiscated from their former owners and would most likely not stand a chance at being adopted from the shelters due to medical or behavioral issues.

Happy Trails has facilitated a foster home for Carder until August 1st, 2018. After that he will need more permanent placement.  While in his foster home, Carder will be learning basic house manners and be given love and rehabilitation, so he can learn to trust again and become a permanent member of someone’s family.

If you can help Carder, please email Erin Swilley at HappyTrailsAnimalRescue@yahoo.com for an application.

Carder will do well with someone who will be patient with him and allow him a tiny bit of space to call his own. He is okay if in a separate room from other dogs; just not face to face with them.

To learn more about Happy Trails Animal Rescue visit their website at https://happytrailsanimalrescue.com/

If you cannot help Carder, there are many ways you can help Happy Trails Animal Rescue by donating, volunteering, fostering, or adopting any of their current dogs.

Sweet, snaggletooth stray needs a new lap to snuggle on
Scroll to top