You are here: Home1 / News2 / Dogs3 / Amazing survival – dog snatched by eagle is found miles away 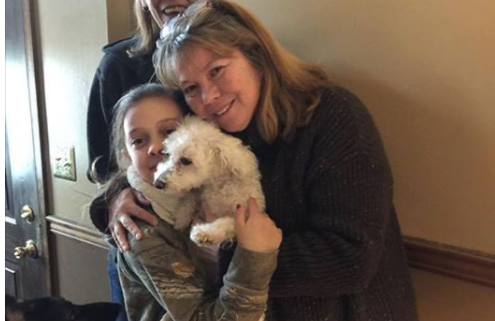 It’s an amazing story of survival – a tale almost too miraculous to believe. On Tuesday afternoon, an 8-pound dog named Zoey was snatched from her yard, not far from the banks of a Pennsylvania river, by a hungry eagle. According to the Associated Press, the Bichon Frise disappeared as the bird of prey flew away.

A tearful search for the missing dog ensued…owner Monica Newhard also posted a photo of her missing dog on Facebook and against all odds, the person who found Zoey, four miles away from her home, cold but very much alive, found the posting.

Newhard let her Facebook followers know that Zoey had been found “by an angel,” who has been identified as 51-year-old Christina Hartman:

Zoey was found yesterday afternoon the Angel that found her saw my story early this Am and reached out to us. Zoey’s Angel kept her warm, feed her warm soup and even allowed her to sleep with her last night.

Hartman, Zoey’s angel, described the little dog’s condition at the time that she was found, “I notice this little frozen dog, icicles hanging from all over. It could hardly move.” She was certain that the dog belonged to someone and was determined to get little Zoey back to her rightful owner.

Zoey is back home – she is a bit sore and somewhat out of sorts, but miraculously alive. Newhard assured everyone following this story that her pets will never go outside unattended again; she wrote:

My fur babies will never be allowed out again unless they are supervised.
Last night was the worst night of our lives. I even questioned why God keeps testing me. I even told my Friend I thought God hated me and then I woke up to a miracle. I believe God wanted me to know that he didn’t hate me and he gave me a miracle.