A husky, who was presumably stolen from the driveway of his owner’s home over the weekend in Fort Bend County, Texas, is back home. According to Click 2 Houston News, the situation turned out to be a simple misunderstanding. The two-year-old dog, named “Fox” was taken away by a man on Saturday afternoon – surveillance video captured the scene and it appeared that Fox was being forced away from his home, and into a van.

According to the local news agency, the man in the video was actually a good Samaritan who thought that Fox was a lost dog who needed to be saved. Fox, a known escape artist, had slipped out of his yard and the man picked him up. Just one day later, a woman and her teenage son returned Fox to his home (presumably after seeing local media coverage).

Everyone involved in this situation is chalking the incident up to an unfortunate misunderstanding. 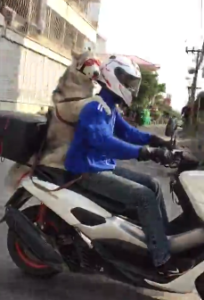 Woman captures video of dog riding on a motorcycle – click here to see for yourself.

Video -who can resist?: Shelter dog Baron needs a home

Beautiful ‘Angel’ on the list to be destroyed at busy animal control...
Scroll to top