On Wednesday, a Texas-based rescue organization introduced a horribly neglected dog to its Facebook followers. The dog, “Venus,” is among the worst cases of neglect that Triumphant Tails, Inc., has ever seen.

Amazingly, Venus, a German shepherd, was surrendered in this pitiful state of health – the rescue group explained the neglectful situation that Venus used to exist in:

With several people residing in the home, Venus lived alone outdoors. The people who lived there couldn’t be bothered to give her food, water, or medical care for the severe case of demodectic mange that she is suffering from. The lack of treatment, over an extended period of time, has led to cracks in her skin that ooze blood. With that, of course, comes a painful secondary skin infection. The animal control officers immediately went to work pulling maggots out of her skin – and called upon Triumphant Tails to get her the medical care that she required. 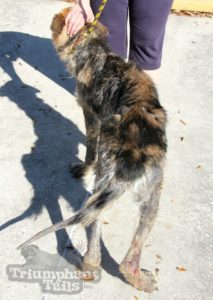 Venus was in such poor state of health at the time of her surrender that she “smelled like death.” Fortunately, thanks to premium food, medicated baths and much-needed veterinary care, Venus is no longer suffering. Amazingly, despite the long-term neglect which she endured, she has maintained a loving (and forgiving) personality.

She is a happy, playful, affectionate dog whose need for human companionship overpowers all else in her life. She is one of the most outwardly appreciative dogs for having us in her lives as my own beloved Solitaire is. They are very much two-of-a-kind in that regard, my shadows, my very best friends.

Saving dogs like Venus is expensive – but without the help of rescue groups like Triumphant Tails, dogs like Venus would not be given a second chance at a real life. If you are interested in helping support Venus’ ongoing veterinary expenses, the rescue group has provided information about how to donate.
1. By way of the “Donate” button at the top of our Facebook page or found on our website at http://www.TriumphantTails.net;
2. By way of check made payable to Triumphant Tails, Inc., P.O. Box 338, Kemah, TX 77565; or,
3. By calling in a donation to Angel Animal Hospital directly at 713-944-2424. 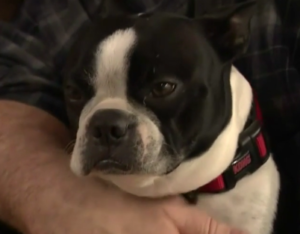 Family’s stolen dog dies just a week after being found