The keen eye of a police chief in Round Lake Park, Illinois, helped solve the mystery of who a victimized dog, tossed in a bag from a moving car, belonged to. According to the Daily Herald, Misty the Puggle was rescued after someone tossed her from a white SUV on Sunday evening.

Round Lake Park Police Chief George Filenko explained, “A woman is walking to work and sees a white SUV drive by on Washington and sees someone throw a (garbage) bag out the window. The woman saw something moving in the bag, peeked inside and there was Misty, somehow unharmed. She took Misty to a gas station/convenience mart nearby.”

As it turned out, Filenko had visited Misty’s family in April and the cute pup had caught his eye – in fact, he had taken a photo of her. When he saw Misty, he decided to compare the dog to the photo that he had taken and he said that it was “pretty close” as far as police line-ups go.

The police decided to pay a visit to the home where Filenko had taken the photo and they found a distraught family who was frantic to find their dog, who had recently vanished. Officers questioned Misty’s owner, Mary Neals, and determined that she was the rightful owner, and not behind the cruel dog-throwing incident. Filenko stated, “We’re convinced they weren’t the ones involved (in throwing the dog) at all. They were visibly upset.”

Now that the mystery of who Misty belongs to is solved, the authorities are hoping to find out who is behind the cruel incident which could have killed the Puggle. Filenko told the Daily Herald, “Just a white SUV. That’s all we got. We’re checking videotape in the area. I’m looking to make an arrest.”

(Image/Stock image of a Puggle via Pixabay Free Images) 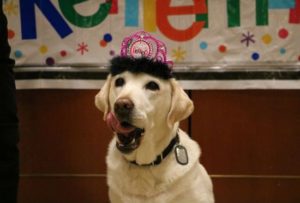